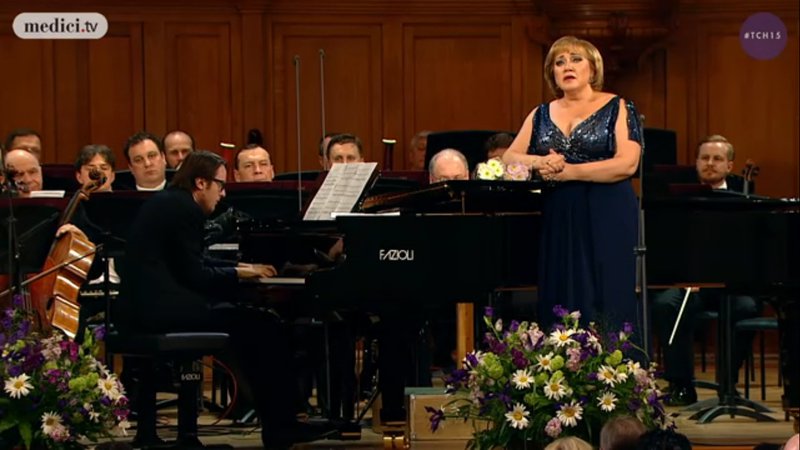 In the days leading up to last night’s gala launch of the XV International Tchaikovsky Competition at the Great Hall of the Moscow Conservatory, I was able to conduct a wide-ranging filmed interview with whirlwind conductor Valery Gergiev, artistic director of the Mariinsky Theatre in St. Petersburg and co-chairman of the Tchaikovsky Competition organizing committee. This interview – which will be featured in excerpts and at length via Medici.tv’s Tch15 coverage over the coming days – included Gergiev talking about the intersection between art and politics, as well as what the Tchaikovsky Competition means to Russia. He also reveals plans for a new concert hall in a park being built near the Red Square.

The initial excerpt of the Gergiev interview appeared as part of Medici.tv’s webcast of the Opening Gala Concert from Moscow last night, with the clip kicking off the program’s debut of The Gazette – Medici.tv’s Tch15 daily live magazine. Gergiev described the Tchaikovsky Competition “as a jewel of Russian cultural tradition,” along with stressing its international character – noting that the very first winner, in 1958, was an American, pianist Van Cliburn. He connected the late Texan with the most recent Grand Prix medalist, young Russian pianist Daniil Trifonov, who has enjoyed a starry global rise since his win in 2011. Gergiev also mentioned how hopeful it made him feel to already hear several young performers among the initial piano candidates who are extraordinary both “technically and artistically.” He stressed how the young Competition performers had an opportunity, in front of millions around the world via webcast, to convey not only “their own feeling about the music they are playing” but also “something about their own vision of the world.” Tune in to Medici.tv’s Tch15 coverage to see more of that Gergiev interview, including the frank talk about music and politics.

As for what we saw and heard at the gala last night, Gergiev and pianist Denis Matsuev – who are buddies – were hosts for the event onstage (and backstage via Medici.tv). The concert showcased a lineup of Russian performers from across the generations, including veteran mezzo-soprano Olga Borodina, who was accompanied by Trifonov in two Tchaikovsky songs: “It Was Early in the Spring” and “Again, As Before, Alone." The latter song was the night’s highlight. It was something special to hear this affecting song done so richly, with Borodina’s lyricism warm and emotive, her blend of language and line so idiomatic.

With this year the 175th anniversary of the composer’s birth, the concert was an all-Tchaikovsky affair. Conductor Vladimir Fedoseyev and the Tchaikovsky Symphony Orchestra began the night with the sunny Capriccio Italien as a scene-setter (even though there was a summer rain shower going on outside). The orchestra was then joined by 13-year-old violinist Georgy Ibatulin for the Mélodie, Op. 42 No. 3. Via the backstage camera, we could see the prizewinning fiddler – who is from Voronezh, Russia, and actually looked much younger than 13 – give himself the sign of the cross before going onstage… Another 13-year-old performer, pianist Alexander Malofeev of Moscow, took the stage with a regal demeanor to play a lovely solo transcription from The Nutcracker made by pianist-conductor Mikhail Pletnev (who won a gold medal in the 1978 Tchaikovsky Competition).

To cap the night, Trifonov reappeared to perform the second and third movements from the Piano Concerto No. 1, one of the Tchaikovsky Competition’s signature pieces ever since 1958 and Van Cliburn’s pioneering gold medal win. Rather than just use the iconic opening as an abbreviated number for the gala, it was an interesting idea to begin with the moonlit slow movement (and the clouds outside had indeed parted by that point); by the time Trifonov reached the bounding final pages, his hair was wet from the warm, muggy Moscow air. If you missed the live stream, you can still watch a free replay of the full concert here.

By the way, you can also watch a period documentary about Van Cliburn’s feat in the first Tchaikovsky Competition – Van Cliburn: Concert Pianist – via medici.tv. We included an excerpt from the documentary in the pre-concert Gazette. As the narrator of the documentary – famous U.S. newsman Dan Rather – says, Cliburn’s unlikely Tchaikovsky Competition win at the height of the Cold War seemed to make “the impossible possible” by underscoring a shared sense of humanity – including a love of artistry – between the otherwise antagonistic East and West. This is something to keep in mind, even today.